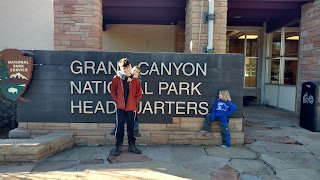 We had a great trip to the Grand Canyon.  We stayed at the RV village in the center of the park.  The best part was that it snowed!  It started out as rain then turned to hail.  Finally, it turned to snow for several hours. We played in the snow for a while and then it turned into rain again.  In a few hours, the snow was gone.

Here is the park in the snow.

Along with the snow, we did the usual hiking around the park.  Always beautiful here.

Good travels all
Posted by Unknown at 9:33 PM No comments:

It's really windy here, mixed in with some Thunder showers.  We've managed to see all the major parts of Yellowstone.   Old faithful and the adjacent walkways are amazing.
Lucy really enjoyed the West thumb area with the geysers right next to the lake. The kids enjoyed swimming in firehouse river.  I really enjoyed the Norris geyser area. 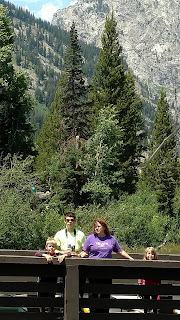 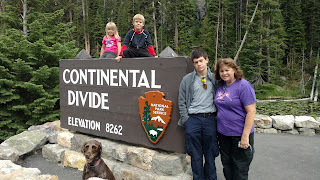 We have met lots of people around the park from all over the U.S.  I spoke with a young couple that came from back east.  They showed me a picture of Devils Tower they took while in Wyoming.   I told them it looked  like it was from the movie.  I got a blank look in return.  I said, "Close Encounter of the Third Kind"?  Still got a blank look from them!  Wow, has it been that long?

So, tomorrow we will pack up and the day we will head south into Utah.

Good travels
Posted by Unknown at 3:19 PM No comments:

Wow, this is a big park..let's go ride a horse.

We have noticed that yellowstone is not big, it's Huge!  We spent all day exploring the old faithful area and that is just a small sliver of the park.  The National  park service does a great job maintaining the park.

Next we drove around the north part of the park to Lamar valley. We saw bison, pronghorn, elk and deer.  We watched stupid tourists trying to get close to the bison for that perfect picture!
On the way out of the park, we found a grizzly with two cubs! It was a great event. The bears walked to a stream and splashed around and then crossed the road.


We rested a day and then went horseback riding at  Eagle Ranch in Island park, Idaho. The kids really enjoyed themselves (Alexander smiled a lot). Devon and Nancy were amazed that the horses just pooped as they walked! 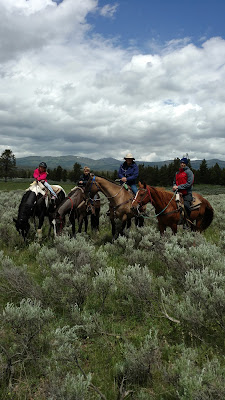 Well, tomorrow we are off to Mammoth hot springs and then to boiling river for a dip.

Posted by Unknown at 7:01 PM No comments:

We had an uneventful drive here.  We tried to meet Ed and Rae at Idaho Falls but they had RV troubles and we did not meet (they did get their rv repaired).

But some good things to know. There is a Five Guys next to Costco in Pocatello!
We arrived at our rv park and it is beautiful!

We arrived late in the evening the day before our reservations and we dry camped in the boat trailer  area.  The next morning, the manager came out and yelled at us because there is no dry camping on the property.   We thought we were going to have an unpleasant stay but he must have taken a Midol and calmed down.

We have hiked around the grounds and have not yet gone to Yellowstone.
Well, that's all for now. We are going into town later but that's about all for today.

Posted by Unknown at 9:11 AM No comments:

We are all loaded up.  We have a new masthead on the front of Gulliver  (Well, it would be a masthead if Gulliver had a mast).  I had Superman on there last year but Devon snatched him up.  I asked Alex to find a Action figure to put on Gulliver and this is what he came up with....I like it!
Anyway, let's see, newspaper held....check...House sitter....check...a hundred other things we were supposed to do before we left...check..ish

Anyway, we are off to Yellowstone.  We will be staying outside the park, near West Yellowstone.

Hiking, trout fishing, sleeping, you know, all that vacation stuff.

Gordon
Posted by Unknown at 9:31 PM No comments:

We had a good time staying at Browns Bay resort.  Unfortunately, they had poor wifi so we didn't post much.  We hope that you took a look at the web cam and maybe saw us on the web ( Brown bay resort RV cam ).  I had hoped to take the Kayak out into the little bay in front of the RVs.  But the day after we got there high winds came up and gale force wind warnings went out for the channel. Here's a picture of the marina.  The cluster of  buildings in the left center is the marina, a restroom and a restaurant that serves all you can eat warm Dungeness crab on certain nights.

The current here is wicked.  The middle channel flows fast but creates huge eddies and causes white caps.  With the high winds, the currents were flowing strongly in the bay in front of the RVs.  We watched one evening, as a tug pulling a barge of lumber was forced to turn around as it fought the winds.  Also, cruise ships went by on a regular basis.  They looked really cool at night.

We met some fellow RVers, Jeff and Lois from Canada.  Jeff recommended a water park and aviation museum on McMinnville, Oregon.  Lois also gave us a bunch of fresh veggies she had grown.

The first morning there, we say a humpback whale feeding in front of the rv.   Pictures didn't turn out well.  There were several eagles in the area and a group of seals that floated around the marina. 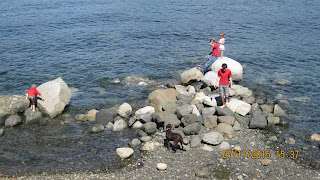 We had dinner at the restaurant.  Devon, Alex and I all had the all you can eat crab.  It was great of course.  I planned on coming back and trying their Salmon burger which according to other RVers was supposed to be great.

One night of especially high winds, a cruise ship came by around 3:30am.   The next day we found out the sea wall had broken.  They managed to tie one end off at the marina and the other end off against the rocks.  The next day, a tug boat was supposed to drag the ends out.  The tug captain, I was told, decided to pull from the middle of the marina line, so the end would get caught in the current and float out.  Unfortunately, he forgot to untie the end tied to the marina!  When he couldn't get the sea wall to float out, he went to full power.  He pulled the marina away from the bathroom which pulled away from the restaurant.  Water and propane lines broke and a pontoon gave in under the bathroom.  The workers managed to keep the bathroom from sinking.   But the marina and restaurant had to close.

A few days later they tried again.  We watched them weld the sea wall back together. 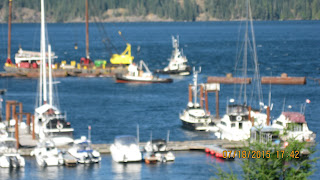 The Browns bay packing company is on the north side of the Marina.  They clean and package farm raised salmon and send it as far south as Sacramento, California. We heard they gave tours of the plant and walked over.  We met the owner of the company, Dave.  He told us we were supposed to schedule an appointment with the RV office.  Dave then gave us a tour himself!  It was a fun tour.  The kids got salmon blood on them as Dave explained and pointed out the various machines.  The fish were pulled from the boat, cleaned, weighed and put on ice in eight minutes or less.

The RV park also had a nice clubhouse with a pool table and a Foosball table. We played lots of Foosball.  Near our last day there we tripped the 30 amp fuse and lost our shore power.  We could not get it to work again. So  we had to run our generator a lot because in spite of the wind and being on the water, it was still warm. Between our generator and the kids we drove one of our neighbors a little batty.  He testily asked me when I was going to shut down the generator and that he had "not got any peace and quiet all day!"  I sympathized with him because with our kids, I did not have any peace or quiet all day!!

Anyway, we left the next day and went to Campbell to have the RV looked at.   The tech plugged in our shore power and of course it worked right off the bat. So we headed to the ferry to catch a ride to Vancouver.

Lucy thought since we drove the kids crazy with lakes and ocean and mountains we should try something more kid oriented.  We drove to Bothell, Washington and stayed at an RV park there.  Me, Alexander and Devon went to the space needle and the Sci-Fi museum in Seattle.
Alexander and Devon weren't that impressed with the Space Needle.  I could have spent much more time but they got bored pretty quickly.


After the Space Needle, we caught the monorail and went to the fish market.  We had a nice dinner and headed back. 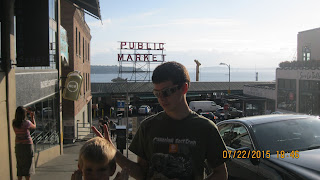 After Seattle, we drove to Gaston, Oregon to zip line at Tree to Tree adventure park.  Lucy kept her feet on the ground but the rest of us had a great time in the trees. 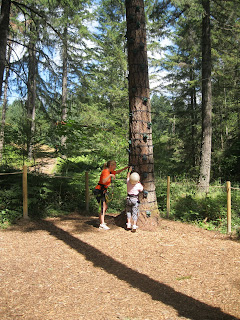 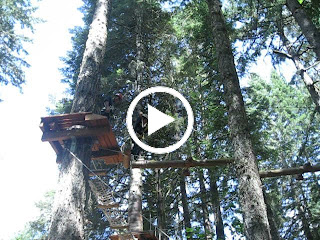 After that, we drove to McMinnville, Oregon to the Evergreen Aviation Museum and the Wings and Waves waterpark. They actually flew a 747 to McMinnville and used a crane to put it on the roof.  Now, waterslides come out of the sides.  The kids spent all day there until it closed.  I went to the museum which has the Spruce Goose, a SR-71 black bird and a full size ICBM missile, all inside.

We drove south and did one more zip line tour at Rogue Valley Zipline tour.  The longest zipline was 1/4 mile long.  Devon wore the Go-pro.  We haven't looked at the video yet.

Finally, we made it home.  We put around 7500 miles on the RV.  We had some electrical problems but we never broke down. One time in Fairbanks, Lucy counted and found that 3 out of 4 cars had cracked windshields.  I fully expected to get a cracked windshield on the road but Gulliver never took a bad hit to the windshield.

It is nice to be home again and sleeping in our beds.  We had a great trip.  We hope you have enjoyed our blog.  We will start up again on our next big trip!

After 3 days of rain, we finally got some beautiful sunshine. Yesterday, the kids spent all day on the beach and then we caught the shuttle to Tofino. 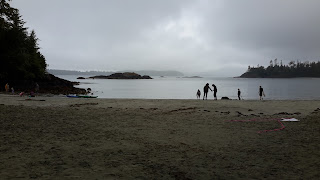 View from the beach as the fog cleared

Of course, there was a lot of playing in the sand. And the obligatory being buried. 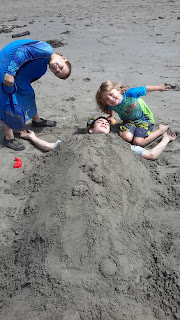 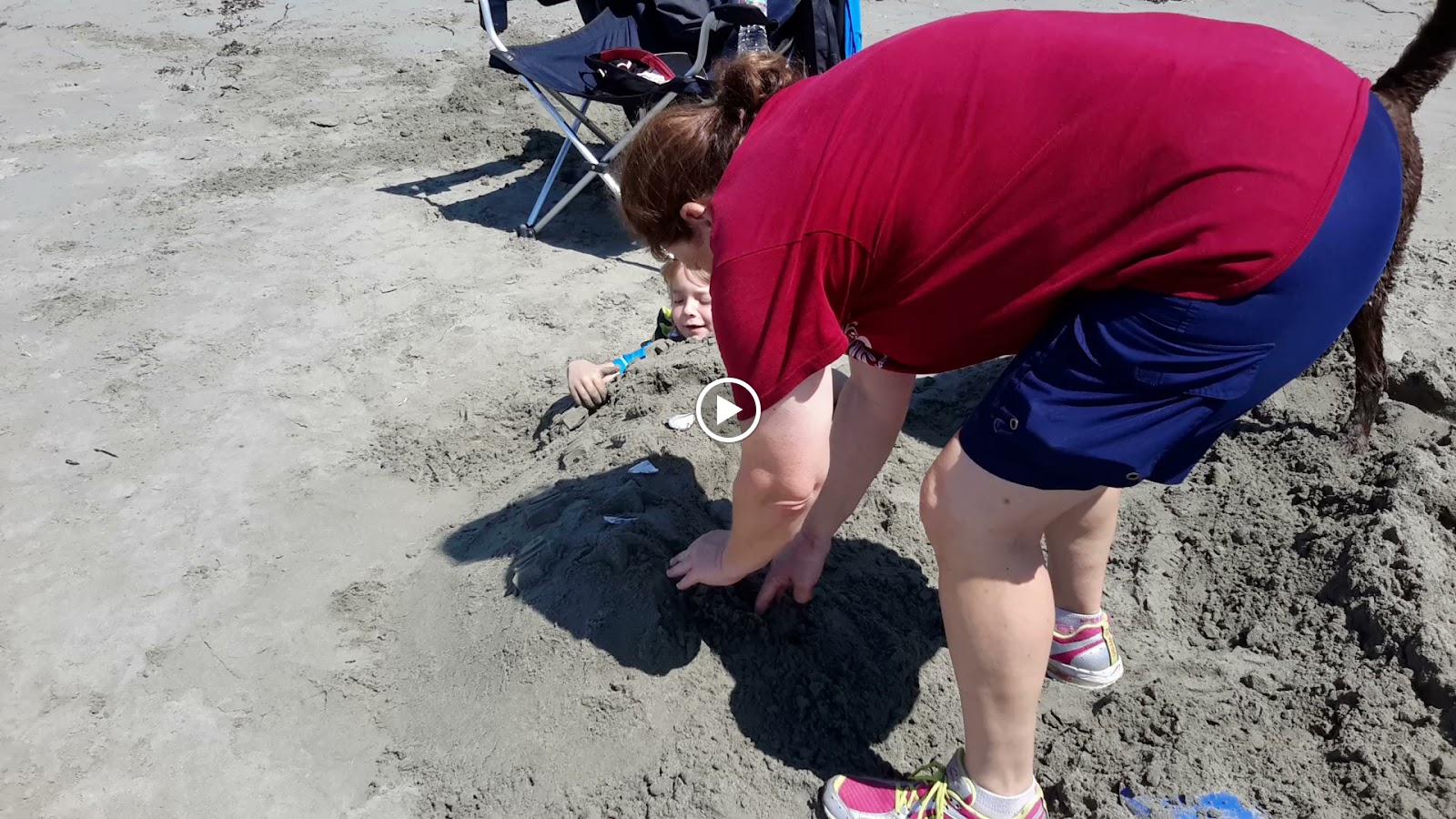 Today, we are off to the east side of the island where we will have an RV spot on the coast.  We will watch the cruise ships go by on the Inside Passage.

Gordon
Posted by Unknown at 9:50 AM No comments: